When researcher Jennifer Koch first visited Ludington State Park in 2002, beech bark disease had begun its path of destruction through the stately beech trees in the Michigan park.

The Ohio-based U.S. Forest Service research biologist has visited Ludington yearly ever since, even getting her kids involved in tracking down the scale insects that allow transmission of the fungal disease from tree to tree.

“My kids have horror stories because I made them collect scale eggs with me,” she said. “Now they’re in their 20s, and they’ll make jokes about it.”

Koch returned to Ludington last week and brought along the results of her long-term research: 250 beech seedlings bred in her lab from disease-resistant trees. Park staff and volunteers planted the 3-year-old, 3- to 6-foot-tall trees. 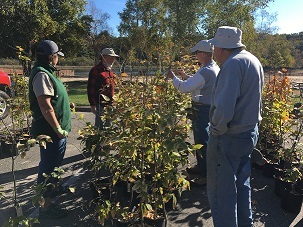 Michigan has 7 million acres containing beech trees. Ludington was the first site in the state where the disease was discovered, back in 2000. The disease had been identified elsewhere in the United States for more than a century, but little had been done to stop it. The Michigan Department of Natural Resources’ Forest Resources and Wildlife divisions provided funding for the development of the disease-resistant trees, and DNR parks and recreation staff (including stewardship experts) will monitor and nurture the trees through their maturation process.

As part of the state’s ongoing battle against invasive species, the Department of Natural Resources and Michigan State University have supported U.S. Forest Service research to identify and propagate American beech trees that are resistant to beech bark disease.

Koch’s work involves cross-pollinating resistant trees; some of those in the lab were grown from seeds collected from a handful of resistant trees in Ludington State Park. The new trees aren’t fully immune from the disease, but their resistance will be from 1 or 2 percent to 50 percent better than a nonresistant tree.

“At least half of them, probably more, are going to grow and never come down with the disease,” she said.

James Gallie, manager of Ludington State Park, said the trees have been planted around the park, including in the hard-hit Beechwood campground and an area to the north of it where weakened beech trees were downed by strong winds.

“It looks like we’re finally going to be able to push back against this invasive tree disease,” he said. “This is a very important first step.”

Funding to support the tree-planting project comes from the proceeds of the “Heart MI” virtual event series hosted by Epic Races. Participants ran, biked, paddled or swam at state parks throughout Michigan during the last year, each paying a “race” entry fee, which included a donation to Michigan state parks. The campaign generated $10,000, and a portion is helping to pay for transportation costs and supplies to plant and protect the trees until they’re larger. Heart MI Run Virtual 5k registration is under way, with proceeds continuing to support stewardship efforts across the state.

Ludington State Park includes 5,300 acres with forests, dunes and miles of Lake Michigan shoreline, as well as shoreline on inland Hamlin Lake. Beechwood is one of three campgrounds at the park.

Beech bark disease has widely been identified throughout the northwest Lower Peninsula and the eastern and central Upper Peninsula, including in Tahquamenon Falls State Park. The beech scale insects penetrate the tree bark as they feed, allowing infection by the Neonectria fungus. The fungus blocks the flow of sap, creating cankers on the tree and killing the wood. Most trees die within three to six years after the initial infestation of scale. Infected trees also are more susceptible to damage by fire or being blown down by wind. It’s estimated that Michigan has lost more than 2.5 million of its 32 million beech trees since the disease was discovered.

Michigan residents are encouraged to learn more or to report a suspected case of the disease. Also make sure not to move firewood, as that can spread the disease to new areas. It is believed that firewood from another state brought the disease to Ludington State Park.

Photos are available for download below. Caption information follows.

Beech planters: Volunteers at Ludington State Park prepare to plant beech bark disease-resistant trees grown in a U.S. Forest Service lab in Ohio. Last week, about 250 trees were planted in the park, where beech bark disease was discovered in Michigan in 2000.

Beech planters 3: Volunteers place a beech bark disease-resistant tree at Ludington State Park Oct. 12. It's one of about 250 trees brought to the park from a U.S. Forest Service lab in Ohio.