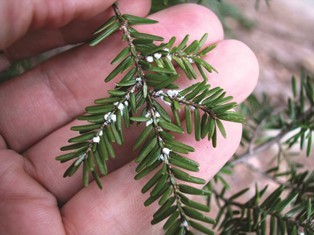 These tiny insects secrete white wax as they feed on sap. HWA feeding also can kill needles, shoots and branches. Over time, growth slows as trees become less vigorous. Eventually, infected trees may take on a grayish-green appearance. HWA often kills infested trees when combined with other stress factors, such as drought.

Hemlock woolly adelgid has been found in several locations in Park, Port Sheldon and Spring Lake townships in Ottawa County, as well as in Norton Shores and Whitehall in Muskegon County.

Efforts to find additional HWA locations are ramping up across the state. In cooperation with MDARD, Michigan State University and others, DNR staff this winter will be searching for HWA in state parks, state game areas and eastern hemlock trees all over Michigan.

"We’re asking for assistance from the public in detecting occurrences of hemlock woolly adelgid in Michigan,” said Roger Mech, DNR forest health specialist. “While people are out enjoying our natural resources, we hope they’ll take a moment to check their trees.”

Quickly detecting and eliminating HWA is critical to slowing the spread of this insect. Eggs and very young adelgids can be carried by birds and can be moved on people’s clothing, hemlock nursery trees, logs or firewood.

Hemlock trees can be protected from HWA with proper insecticide treatments.

“Citizen involvement in reporting and treating HWA is crucial for the future of hemlock trees in Michigan,” said John Bedford, MDARD Pest Response Program specialist. “Examine your hemlocks, or have them examined by a qualified arborist and, if HWA is found, treat them or have them treated.”

A statewide response strategy requires knowing precisely where hemlock woolly adelgid occurs. The insects have entered Michigan several times in the past decade from HWA-infested areas of the U.S. Each time HWA has been detected in Michigan, MDARD, the DNR, MSU and the U.S. Forest Service have joined forces to address this threat.

If you find a possible HWA infestation, take photos, note the location of the affected trees and contact MDARD at 800-292-3939 or MDA-info@michigan.gov. To prevent spread, do not move the potentially infested material.

/Editors' note: Accompanying photos and caption information are available below for download.