Over the past few years, white spruce and balsam fir have been defoliated by the spruce budworm, one of the most destructive native insects in the northern spruce and fir 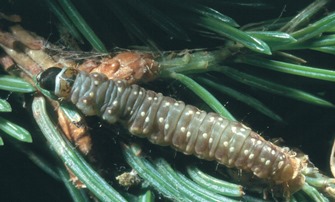 forests of the eastern United States and Canada.

“This year, budworm defoliation is widespread and expected to be heavy for the second or third years in many areas,” said Bob Heyd, forest health specialist with the Michigan Department of Natural Resources in Marquette.

Periodic outbreaks of these insects are a part of the natural cycle of events associated with the maturing of balsam fir and white spruce.

Spruce budworms overwinter as tiny caterpillars which disperse by dropping from treetops on webs. As new tree growth expands in the spring, the caterpillars grow and feed on new shoots. Budworms produce one generation each year.

Younger trees infested with spruce budworms lose much of their new growth, but generally survive.

Balsam fir is most severely damaged by budworms. White and black spruces are also budworm hosts with some feeding occurring on tamarack, pine and hemlock trees. Spruce trees in stands with balsam fir are more likely to suffer budworm damage than spruce in pure stands — although all older, mature to over-mature stands are at higher risk of budworm infestation.

Heyd said this is the time of year to combat spruce budworms.

“Check your trees for signs of budworm activity,” he added. “Most of the damage is done between now and late June when the budworms pupate and are done feeding for the year.”

The DNR recommends keeping the following in mind prior to treating trees:

Since 1909, there have been waves of spruce budworm outbreaks throughout the eastern United States and Canada. These outbreaks last for 10-15 years and have resulted in the loss of millions of cords of spruce and fir.

“If the budworm outbreak continues to expand into Michigan’s spruce and fir resource, we can expect significant losses over the next decade,” Heyd said.